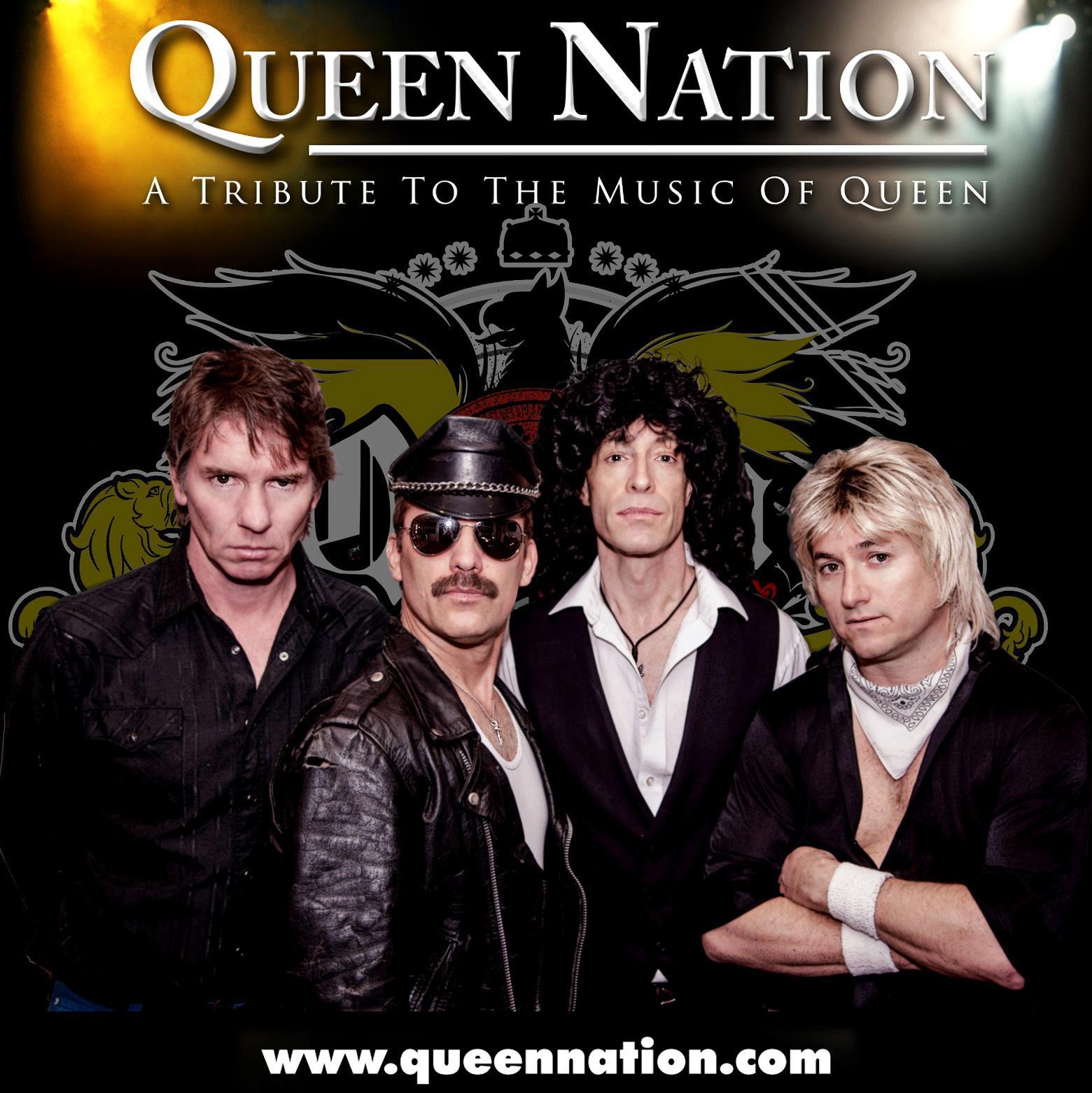 Join us July 24th for a socially-distanced concert featuring Queen Nation tribute to Queen!  This event will be on our concert lawn and will be a socially distanced event with pod seating. Pods will be on a first come, first serve basis so bring your chairs or blankets and enjoy a night of live music. Masks are recommended.  Gates at 6PM, concert at 7:30PM.  Admission is Free!

There is little doubt among the pure rock community that the legendary band Queen and lead performer Freddie Mercury earn high ranks as one of the most powerful and iconic groups in rock history. Queen, the kings of arena rock, performed to packed stadiums around the globe for over two decades.

Freddie took showmanship by a rock front man to a new untapped level and was undisputedly crowned the Lord of arena rock. He mesmerized audiences with his charismatic energy and larger than life stage persona. Upon his death in 1991, a huge void was left in the rock concert world, which to this day has not yet been matched.

Queen Nation, a tribute to Queen, The show was formed in 2004 by LA based  music agency DMHE .  Queen Nation is the West Coast’s longest running most authentic costumed re- creation of a Vintage Queen concert. The show consists of four musicians (not 5 or 6 artists as in a few other Queen Tributes) who all sing and perform in character and in period costumes while playing live note-for-note renditions of Classic Queen songs.  Featured  front man Vocalist Gregory Finsley is an amazing singer with an uncanny tone that matches the late great Freddy Mercury to a tee . Gregory also is an excellent concert pianist which  allows him to accurately  re- create what  Freddy Mercury  magically did live on stage in Queen’s original four piece lineup. Queen Nation has been crowned by their loyal legion of fans as  “The  Peoples Choice Tribute To Queen Champions ” arguably they are one of the hardest working tribute bands in the US .

Queen Nation consists of: Gregory Finsley on vocals & keyboards as Freddie Mercury, Mike McManus on guitar as Brian May, Pete Burke on drums as Roger Taylor and Parker Combs on bass as John Deacon. The mission of the show is to carry on the musical torch and pay homage to the golden age of vintage Queen concerts.

Queen Nation’s live 90-minute production of Queen’s greatest hits preserves the image, sound, and stage persona of vintage Queen. Audiences are amazed at the accuracy of Queen Nation’s live retrospective journey through such Queen songs as We Will Rock You – Bohemian Rhapsody – We Are The Champions – Crazy Little Thing Called Love – You’re My Best Friend – Another One Bites The Dust – Under Pressure and many more. They have performed in front of thousands of people at casinos, fairs, festivals and private affairs.

Join us July 24th for a socially-distanced concert featuring Queen Nation tribute to Queen!  This event will be on our concert lawn and will be a socially distanced event with pod seating. Pods will be on a first come, first serve basis so bring your chairs or blankets and enjoy a night of live music. […]