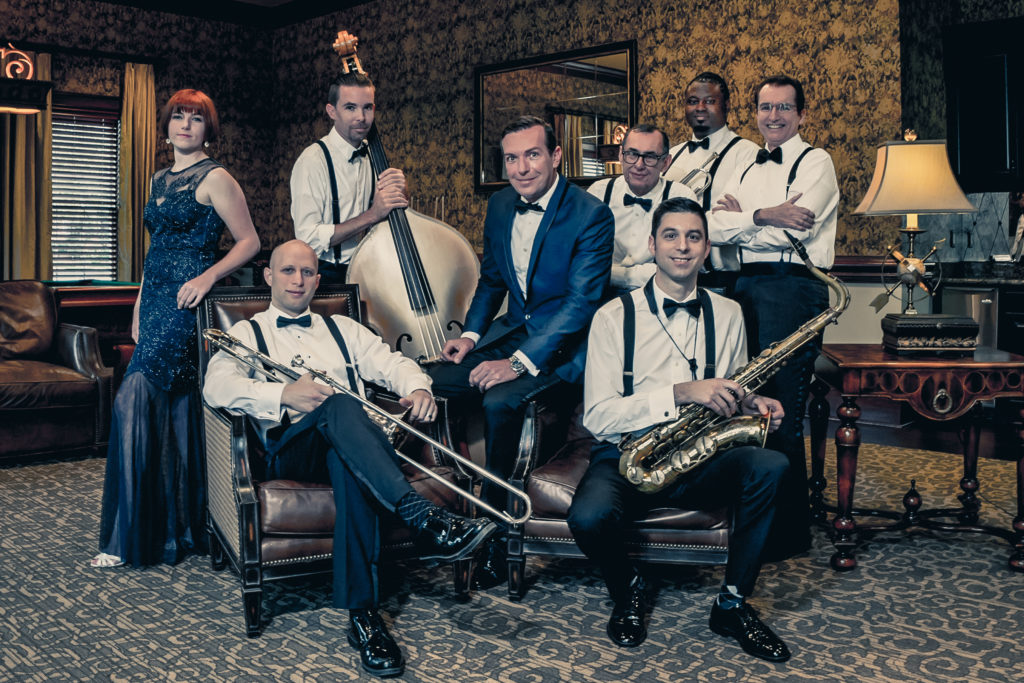 It could have been when brothers Brett and Jeff Cahoon stepped away from the success they’d achieved with their punk band Ten Years from Now and chose instead to see what they could do with the old-time jazz standards they’d admired for so long. The brothers Cahoon formed a small combo, and – wouldn’t you know it? – plenty of others felt the same groove.

Or maybe it was when an inside joke made a name for itself. Their mother, Judy Cahoon, is an avid golfer, and just as common as pars and birdies were three words of encouragement shouted by a supportive friend, who pumped a fist and hollered across the fairway every time she took a swing: “Good shot, Judy!” It became a funny family warble among the Cahoons – and as it turns out, a solid band name, too.

Or perhaps that moment of creation arrived when Good Shot Judy freed their potential energy. Keen to give the classic melodies the respect and attention – as well as the power – that it deserved, the Cahoons filled out Good Shot Judy with a full complement of horns, percussion and vocals. And magic happened: an ensemble that was bigger than the sum of its parts.

In a sense, Good Shot Judy was already in the stars long ago, during those formative decades from the 1930s on, when small jazz combos, big brass bands and the crooners who sang on top of them were forging an enduring style and repertoire that would be written into the DNA of American music.

But really, all these had a hand in making Good Shot Judy what is today: a big amp jazz band that sets stages aflame nationwide.

Audiences may never consider that the Good Shot Judy show they’re seeing has been an evolution. They’re too captivated by the sound and spectacle of music that reaches through the time. They’re too caught up in performance that has one foot dancing in the past and one in the here and now.

A Good Shot Judy show offers all those tunes you know just from growing up in American – songs you can at least hum along to, if you don’t outright know most of the words. But the music itself is only part of the band’s allure; there’s something electric in the execution, and it’s that vigor that carries the day as much as the pull of recognition.

So, yeah, there’s a history. And it’s a big one. Bigger than any one person. Bigger than any one band, for that matter. But Good Shot Judy is as close as it comes to an intersection between an era’s defining sound and the pleasure of enjoying it the way it was meant to be heard.

It’s hard to nail an exact moment when Good Shot Judy came to life. It could have been when brothers Brett and Jeff Cahoon stepped away from the success they’d achieved with their punk band Ten Years from Now and chose instead to see what they could do with the old-time jazz standards they’d admired […]